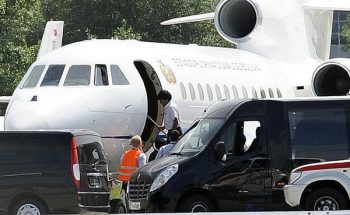 Bolivia's President Evo Morales, center, enters his plane at Vienna's Schwechat airport, Wednesday, July 3, 2013. The plane of Morales was rerouted to Austria after various European countries refused to let it cross their airspace because of suspicions that NSA leaker Edward Snowden was on board, Bolivian officials said Tuesday. Officials in both Austria and Bolivia said that Snowden was not on the plane, which was taking Morales home from a summit in Russia, where he had suggested that his government would be willing to consider granting asylum to the American. (AP Photo/Hans Punz)